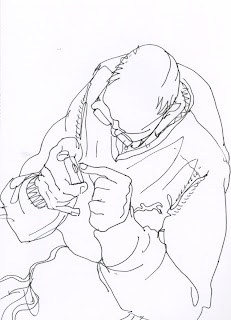 At first this guy looks like another phone texter, but in fact he had a small pocket calculator and was adding up over and over.

He sat in the square, in the sun, in his pullover, and just added and subtracted. And maybe multiplied. But no note book or pen or hint of what his sums amounted to.

There was a clumsy bluntness to him that I am glad the odd shaped arm kind of gives. The weight he was putting behind that finger as he stabbed in the numbers. And that single. furious concentration between him and the machine. This was beyond work, this was obsession.