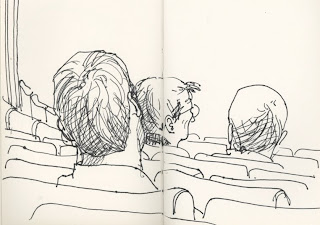 I had been invited to a preview screening of an independent film, and said I'd go. Always up for a film, always up for anything free !

When I got there there it was clear hardly anyone else had turned up, only a few of us scattered around the cinema, but nonetheless positive, and ready to discover a cinematic gem. I sketched them as I waited. The Director got up and did a little speech, the Producer and some of the cast were there as well. They all sat bang, front and centre.

And the film started. Now I will always applaud anyone who gets a film made these days. The effort and struggle to get from script the screening is Herculean. So hats off to them.

But it was so bad. Sorry, but really. It was so over exposed at the beginning you couldn't actually see what was going on. There were seagulls and some heroin, but how they were linked was a mystery. And it seemed to be shot in someone's front room, which is fine, apart from the seagulls. Then it plunged into a night scene that was so dark, it made the over exposed section look good.

After half an hour I had to leave, it was too painful to watch, but how to sneak out, when it was so dark that I couldn't see the way. I waited, and waited, then took my chance, got my coat, and tried not to make too much noise. And, just as I got to the front, tiptoeing past the film's makers, another overexposed scene came on, flooding the cinema with light, and me, straight in front of them, leaving their magnum opus.