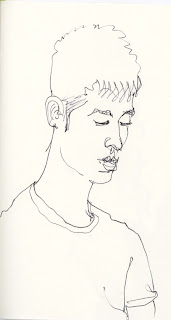 This guy was on the train coming home from the Prom last week. He was very tall and thin. His t-shirt was printed with the whole tuxedo and bow tie image, but I didn't draw that in. Would have looked odd.
Look at how I ended up drawing his fringe.  It looks like the squiggly bit of Elizabeth the first's signature, the one she used to put on all the posh documents, not the one she used to pay the gas bill.
Useless information of the day.


A 246 is a staggered block used to put under the legs of chairs to raise them up into frame when filming someone at a table. So called because you can raise the chair by 2". 4" or 6"