Music to my (neighbour's) ears 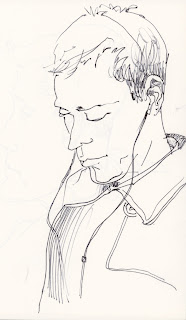 Wanted a musical sketch for today, as I have just arrived home to my neighbour's friday disco session. Anyone who knows me will know of my neighbour's love of playing his music VERY LOUD on fridays, often, but not always followed by the movie TITANIC, again VERY LOUD. I would have no trouble guestimating he has watched it ( and, by extension, I have listened to it ) easily 200 times.
JACK ! JACK ! JACK !
Today it's Soft Cell and Erasure.
Although I may be mistaken, and what is really happening is a worm hole back to the 1980's opens with alarming regularity, ONLY in his living room.
It amuses me more than anything, I just plug myself into my own choice of listening ( at this precise moment it's the Florence and the Machine album. = I leave it to you to decide who has the better taste, and am not assuming you will automatically think it's me )
So anyway... this guy was from the other day, same day as the man in white jacket, no.89. Had to stand up on the way back, and was taken by the piping on his coat. An odd thing to notice, but it appealed to me.
A lot of people plug into i-pods on the return journey, more than in the morning I've noticed, like they need to zone out more before they get home, than get to work.
My neighbour also has his own disco light, I have seen it flashing on several occasions. The rest I will leave to your own imagination.
But if your name's not on the door you're not coming in.
Posted by Keith on 3/26/2010