Sat opposite two London transport policemen, so had to sketch.

The one I sketched was unaware, ( so much for eagle eyed keeness ) but his mate clocked what I was doing. 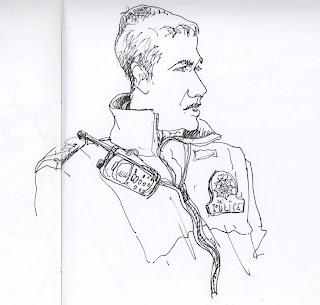 And then I remembered that new law about being an offence to record the image of police officers when they are working.
Was I about to be arrested ? My sketch book impounded as evidence, bagged and labeled exhibit A my Lud.
No... just dull, brilliant life as always... they just carried on discussing their work shifts, and who was on after them, and what Tom had done with the work rotas.
So I sketched more.
He leant forward and started turning his cap around and around in his hands as he spoke, like checkered worry beads. 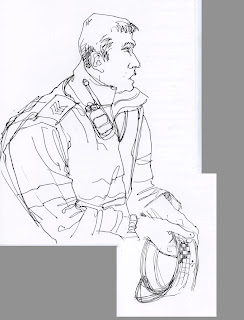