This guy's shirt labeled him as a Time Keeper.  He waited on the trackside until things had happened, then went out into the middle of the stadium to converse with other Time Keepers. 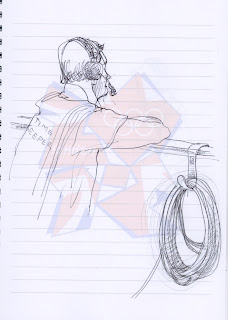 One thing I noted about him was he was VERY tanned. Must have just been on holiday I asumed.

But later, when the event was over, he spent the rest of his time in the centre of the stadium sitting in the sunshine next to what I assumed was a very important time measuring device that was not to be moved or tampered with. If he had done that for the whole of the sporting spectacular, no wonder he had got him a tan.

So he was less of a time keeper, more a time body guard.

You ain't gettin' in without a watch on.