Anyone else see the recent turbine hall installation at Tate Modern ? Tino Sehgal had all these people moving and interacting with visitors, sometimes singing and then merging back into the crowd like they had broken out of the usual and then been claimed back by the real world. He says it was a portrait of London as diverse view points rather than one person's idea.

I loved it, it seemed to touch on so many connections, Flashmobs, Olympic athletes and crowds, Lowry's crowdscapes, Pollock's random gestures, shoppers, cathedral choirs.. I could go on. Small kids joined in and ran about with them like the adult world had finally woken up to the real fun of living.

And every so often one person would detach, fix on you as you watched, and come over to tell you some small story from their ordinary experience.

I was told, at various visits, about a guy buying bread and beer late at night in Brixton, a couple missing the Eurostar to Paris twice in one day, a woman in bed with a headcold while a fair set up in the field behind her house, an American woman being surprised she knew all the words to the US national Anthem after living in the UK for so long, and others.

It struck me these small tales were as much sketches as any drawing, they were selected views of someone that told something, but not in any way all, of that person. And I thought what would it be like if I sketched them whilst they told me these, a sketch of a sketch. So I had a go, and it was weird. I tried first with a girl who was telling me about her relationship with her mother ( I did ask if they minded before I did anything ) And it was way to intense. To be that close to a stranger and to look at them as subjects to sketch was too much. To look at and into someone's eyes, to see the tiny flecks of colour in their iris as they told you these things broke too many barriers. One girl almost jumped when I asked, and if the piece was about breaking down the wall between people my sketching did it too much. For both of us. Whilst putting another wall up at the self same time. The relationship between viewer and subject is an odd delicate curtain at the best of times, to try and throw it up instantaneously proved disjointing.

Everything I drew was odd, and uncomfortable, a bad idea. And I had to back away from the idea and go back to distance sketching.

So all I have to show for it is this, of someone else being talked to. 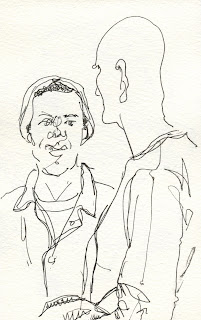 Whereas I was told about people's relationships with their family, and about them reassessing their world from another's point of view, this guy was getting a lesson in how to make tomato sauce.