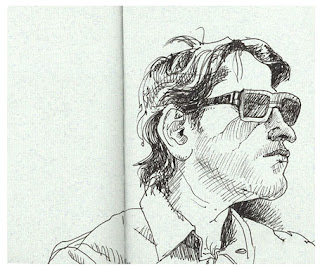 Ah, the sun. Remember it ?
This was on a train last year, was going to Herne Hill, early in the morning, with the commuters. A load of people had got off at St. Pancras, so there were seats by the time we reached Blackfriars Bridge. Had stood up to this point, but, as we pulled out across the Thames, I nabbed a seat opposite this guy, and was taken with how his sunglasses cast a strong shadow across his face, but I could still see his eyes.
Did several, this is my favorite.
Posted by Keith on 2/24/2010