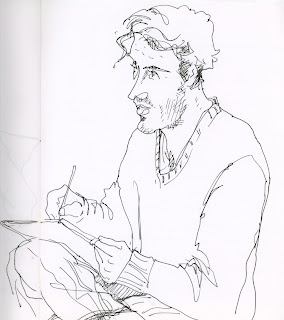 Caught some students sketching in a museum the other day, They had ranged themselves across a gallery of statues, and had become as much a part of the display for the other museum visitors. People were sneaking looks over their shoulders, or just out and out standing and watching them, engaging them in conversations. And it would seem that the sketcher-watchers fall in to the same two types as the sketchers - those who do so unobtrusively, and those who want the world to know, to acknowledge them.
So I sat down, sketched the sketchers, and became part of the incidental theatre we had all created. 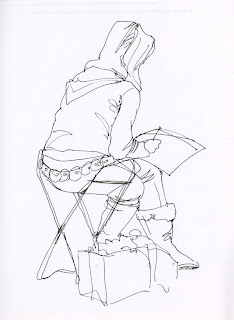 Really enjoyed this girl's belt and boots. I often run out of time, or space when I get to the feet, or just plain chicken out, 'cos feet are tricky creatures. So like that she is complete, although her bag lets me off here a bit.
But ohhhh... that gap of flesh across her lower back... Museums are drafty places at the best of times... she should have worn a vest. She'll regret it later in life, mark my words.
Posted by Keith on 3/23/2010