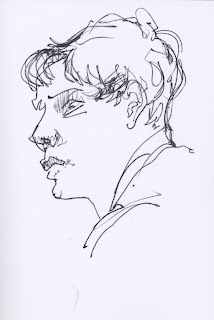 Dragging home on the train late the other night. A gang of lads, off their trolleys, three sloshing bottles of astonishingly blue vodka that had already clearly passed many times between the four of them.
Don't think I could ever have caught just how rat-arsed they were.
( Is rat-arsed hyphenated ? )
And, at the other end, two girls, emptying their handbags of every cosmetic chemical allowed under UN treaty, discussing and demonstrating each one loudly. "Do I have wrinkles ?" " You have one, there" " Try this - it's brilliant." The REAL war. They couldn't have been more than 22.
Polar opposites, waiting to meet. Seismic shifts.
Though not, judging by these girls' skillful indifference, on this night, or this train.
Posted by Keith on 2/13/2010