This guy knew I was sketching him and would not keep still. So I ended up with a page of false starts which I quite like. 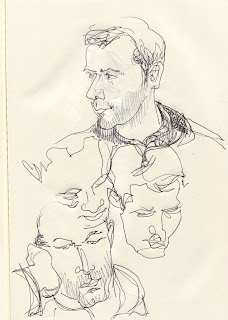 Whereas this guy was so lost in tired daydreaming I think a meteor could have struck us all down and he would have been left blinking in the rubble saying " Sorry, I missed that ? " 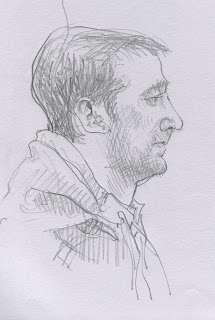 This one was also done on the way home from life drawing, and it amuses me that I used pencil instead of my usual weapon of choice, pen. Like that was the mode I had been set on that night, and nothing was going to change that. Like I had gone back to the factory default settings. And I was conscious at the time I couldn't get the shading as dark as I wanted, but it didn't figure to me why until much later.
Posted by Keith on 4/24/2013