Was waiting to meet someone in the bar downstairs at the Curzon Soho the other day. Had got there early, so did some sketching. You always get film folk working on their new script or having meetings about projects there. There was even some actors rehearsing something the other day, standing up, acting it out, the lot. It's like Dean Street's unofficial office.

This guy was intent on his Apple laptop. Script...e-mails... couldn't see.

But very pleased with how he turned out. 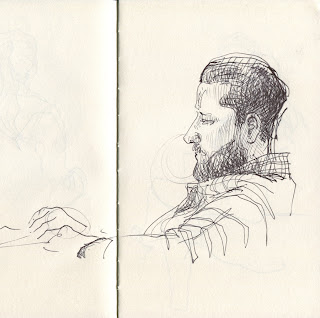 Had a few tries at his head shape, the truth is somewhere in all those lines.