Went to watch the marathon races on the last sunday.

As always the athletes were too fast to sketch ( although I had a go ) but drew the stewards manning the barriers.

This guy was in the best pose ever, obviously bored and tired in the mid morning sunshine. 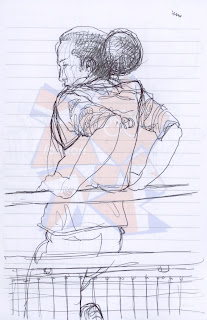 With his elbows and afro, he was a joy to draw.

Then, further down, a whole load of them were manning a crossing. 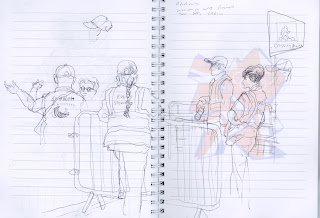 Although the word 'manning' makes them sound a lot more active than they actually were.

The woman with the plait, she was obviously in charge. She had the radio.

"Who put the arrows the wrong way round ?" she demanded in a voice even I could hear. "they are confusing everyone."

No one changed them though.

What is the collective noun for a gang of marathon stewards ? A cramp ? A halt ?