I was going to post these last week, but the scanner problem stopped me, so allow me the small delay.

It was 25 years last week when the Big Storm swept across Southern England and toppled all the trees.

I was at college at the time, and walked thru Kensington gardens to get there everyday. The sight of all those trees, shattered and uprooted, was astounding. Some of the root systems were as big as houses.  It was a surreal and charged place for several weeks as they worked to clear them all away.

Anyone else remember the avenue of plane trees towards Kensington Palace that were all flattened ?

I went out sketching the next day, it was too beautiful and sad and unreal to not. And here are two from that day. 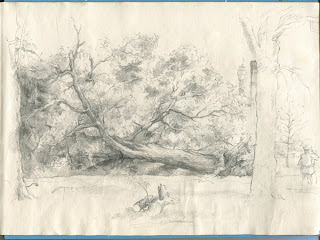 I was included in some photographs a news reporter took, but have never seen if any of the photos with me in were ever used anywhere. I suspect not. The world can only deal with one trauma at a time.

This was my favorite sketch, at the time, and now. You will need to click on it to enlarge it to see it.

This tree had literally been twisted apart, the truck standing upright, but every single branch had been ripped away and lay around like huge scattered arms. It was up by the Lancaster Gate entrance between Kensington Gardens and Hyde Park. I also added a sketch of the photographer. in the top corner, see.

Seeing the sketch again brings that day back in such sharp focus. I am back there, right now, on the same spot, in my mind.